We have all heard about The Big Bang Theory, but only a few of us know the details of it. The concept of the Big Bang Theory conceived almost a century ago. For ordinary people like us, it simply means how the universe came into being. But in reality, it is a lot more than that. For cosmologists, it answers a lot of questions about our existence and the universe as a whole.

The Big Bang Theory defines how the universe extended and turn into what it is today. To find answers to all such questions, you need to go through and understand the details of the Big Bang Theory.

Things to know about The Big Bang Theory

Today, most of the universe is about dark energy, and that is what is dominating the universe. Around 14 billion years ago, the universe was smaller where all the matter was tightly packed together. With density acting on these matters led to the big explosion called the Big Bang.

The Big Bang Theory is a complex thing and requires a great degree of understanding to learn its details. Unless you are a cosmologist yourself, you may not be able to get the whole idea of it. To put it, the Big Bang theory explains the formation of the universe we live in today.

Before we talk about the 'Big Bang' , let me clear one thing out. The big bang never had any "bang" during its process. If you could be in a hypothetical time just before the big bang happened, it would just be like watching fireworks with no sound being emitted. The obvious reason being, sound needs a medium to propagate.

Now, what created this 'Big Bang' has been in constant study till date. This includes theories of 'religion' to pure logic. To keep this simple and less controversial, lets take a logical explanation.

Our present universe is 13.6 billion years old. One day, it would meet its eventual end. The most probable end for our universe as predicted is going to be through 'Hawking radiation'.

As a gist, the entire universe will be filled with supper massive black holes that suck up every type of matter and then radiate away leaving behind only the building blocks of matter.

Also, we think that our universe plays an endless loop of creation and destruction. 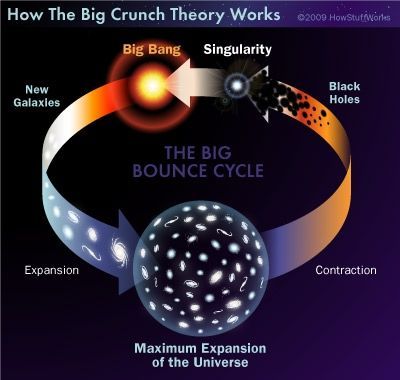 Also known as the 'Big Bounce Cycle'.  This theory also takes into account the 'Big Crunch' . Which basically occurs due to immense gravitational field exerted by the universe.

If this theory is true, then the Big Bang is likely to happen again after our universe meets its inevitable end.

For all we know, the universe is just as young as an infant for now.

Hey guys! Why not look into my series - "What does the night sky teach us about the universe?"